PPP Won’t Buckle to Critics on Scope of Practice

Physicians experienced a roller coaster of emotions when the American Medical Association (AMA), the nation’s largest association of physicians and medical students, posted and then quickly retracted a tweet supporting physician-led care.

The tweet, which depicted a graphic of Scrabble tiles spelling out the letters “PA,” “NP,” and “CRNA,” and the words, “because patient safety isn’t a game,” stated:
“Patients deserve care led by physicians. Read how #OurAMA fights to #StopScopeCreep and defend patient safety through research, advocacy, and education.” 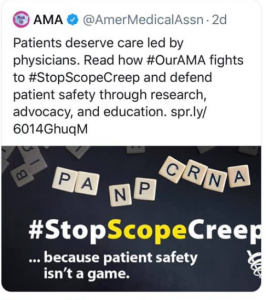 Although the AMA has been using the social media slogan “#StopScopeCreep” for some time, this particular post stirred up a firestorm in the Twitterverse, with physician assistants (PAs), nurse practitioners (NPs), and even some physicians criticizing the AMA and demanding that the post be taken down. Commenters complained that the tone was “divisive” and inappropriate during a pandemic. Several physician influencers called on the AMA to “do better” and to “elevate our colleagues.”

Many physicians took to social media to applaud the AMA for its stance supporting physician-led care.

In response to the criticism that the post was “divisive,” advocates pointed out that nurse practitioner and physician assistants have used the pandemic as an opportunity to advocate for increased practice independence.

To the disappointment of many physicians, the AMA abruptly removed its post without comment. Some doctors have perceived this retraction as evidence that the AMA caved to pressure from non-physician entities.  “It’s shocking and discouraging to see medical organizations being bullied by nonphysician providers,” said Vrunda Pandya, MD, an anesthesiologist.

Carmen Kavali, MD, an AMA member and board member of Physicians for Patient Protection said that, “it’s disheartening that the truth is offensive to some. The truth is that patients deserve physician-led care because everyone on the healthcare team is important, but not interchangeable.

When cancel culture comes for truth, we should all be afraid.”

But all is not lost. In a private message, AMA president Susan Bailey MD assured physicians that the AMA is not backing down and will continue to fight. As the AMA regroups, physicians can always look to Physicians for Patient Protection, a group with the sole mission of advocating for physician-led care and truth and transparency among healthcare practitioners.

We will not be intimidated or bullied.

We will not back down from our mission of ensuring patient safety.